The Eastern religions, like Buddhism and Hinduism, teach we are already "good" at the core.

Finding Calcutta: What Mother Teresa Taught Me About Meaningful Work and Service

In the end, what really causes Poplin to fail is the continuously stated belief that only her religion has it "right"; that only her god is the true god and all others are inadequate for addressing what it means to be human. For this, she would be well suited to turn to the Buddha to learn a bit of the suffering caused by clinging to fixed views. Apr 11, Elsie Lo rated it really liked it. Mary Poplin, professor and educator, shares what she learns about calling and vocation from her visit with Mother Teresa.

She recounts bits of her volunteer experience and what she observes of Mother and the other Missionaries of Charity, who have given their lives to serving the poorest of the poor in Calcutta. The book wraps up with a bit of Poplin's travel itinerary after her time in Calcutta, highlighting more the work of the Holy Spirit as she makes her return to the other side of the world with a few stop overs along the way. What stands out to me from the book is the single-mindedness of the Missionaries' devotion to loving the poor as though Christ and their commitment to suffering as they live out their calling.

Suffering and the ordinary do not make frequent appearances in the "calling and vocation" conversation much here in the 'west'. I appreciated this perspective that Poplin tried to draw out repeatedly It's a breath of fresh air in the midst of reading a lot of the literature in faith and work, where many of the examples given and by extension, the principles, are built on middle and upper class, white American privilege I could go on, but them this would become less of a book review!

Dec 28, Lindsey rated it liked it. This is a lovely little memoir. We can learn a lot from Mother Teresa and her ability to ignore social movers around her trying to "update" her ministry. The experience in Calcutta completely changed Poplin's own life. It was a little hard to make a cohesive story out of this despite the fact that Poplin writes it more or less in chronological order.

I think this is because she focuses each very short chapter on a theme. That just made it difficult to remember what each section was about. Unle This is a lovely little memoir. Unless you move very slowly and reflect after every few pages, you only get little pieces here and there.

Feb 25, Laura rated it it was amazing. She showed me that it is less about the actual work and more about the attitudes and the spirit in which we do it. The faithfulness with which we perform a current job builds the character needed for the next one. After this I have grown and yet I am so much smaller. I was so honored to get to hear Mary Poplin last night at a C. Lewis Conference. Oct 09, Nikki rated it it was ok. This book was ok. It was quite repetitive. There were some useful insights given, but I felt like it was very superficial and too easily accessible.

The description given about Calcutta was interesting, and the interactions the author had with Mother Theresa were worthwhile. May 30, KK rated it really liked it. Really interesting peek into the World of Mother Teresa. A woman who was completely selfless and faithful, she not only changed lives but the face of an incredibly impoverished nation.

Great read. Sep 14, Katrina rated it it was ok. Not my favorite. The genre just rubs me the wrong way. Book club choice. Feb 22, Kat rated it liked it. I really enjoyed learning about mother theresa and some of the work in calcutta.


A good read. May 25, Rebecca rated it liked it Shelves: makes-you-think.

She gives an interesting perspective, coming from a secular world and entering into a purely religious one, as she learns to adjust to live with the missionaries in their utterly distinct lifestyle, and the questions she faces about everything she once thought was "true. I thought Poplin could have delved into each of the 30 chapters a bit deeper, giving more background or contemplation rather than the expected "lesson learned" fluff that coated the book.

However, she does keep the reader's attention with tearful examples and even nonchalantly and unexpectedly revealing her past history of abortions. As someone who is always looking for books to help encourage or strengthen my relationship with Christ, I found this book to be extremely helpful in looking at ways I can change and better this relationship, and my life. For example, these following passages really struck a chord with me and made me question how I approach certain people and situations on a everyday basis, and made me reflect on ways I can change this: "I began to think how different I would work if I truly saw each person I met as a hungry, hurting Christ.

What if every time someone came to me with a problem, I responded as though Christ himself had approached me? What if I saw everyone all day long as in need of a touch from God, and what if I were yielded enough that God could actually use me to give his touch? We could use a lot more grace and friendly waves of gratitude on the freeways We have so many opportunities to leave things better every day.

Unforgiveness is a relentless enemy to all who hold onto it It is from his birthday that most of the human race dates its calendars, by his name that millions curse and in his name that millions pray. Feb 05, Michael rated it it was amazing Shelves: life-lessons , nonfiction , religion. This is a lovely, well-written book. Poplin, a highly educated Western college professor of the left-wing feminist stripe, became a Christian which seemed to surprise the hell out of her and went to India to work with Mother Teresa.

While there, she learned a great deal about what it means to commit one's self entirely to the poor. To say that Mother Teresa and her Little Sisters of the Poor practice radical Christianity is a complete understatement. These women literally become the poores This is a lovely, well-written book. These women literally become the poorest of the poor. They own nothing. They keep nothing. They want nothing but to help those whom society has forgotten. Having read a great deal about Mother Teresa before I love her , it was interesting to see her work through the point of view of someone with a background similar to mine: educated, suspicious of mysticism and the supernatural, steeped in left-wing thought, etc.

The author's takeaway is that the sisters are the opposite of social workers, or political reformers: they are trying to be Christ to the people they serve. They have no agenda other than feeding, comforting, healing, and being companions to, the 'least, the last, and the lost. Having studied, and practiced, Christianity for quite some time now, I am struck again and again by how simple to understand, but how difficult to live, the teachings of Jesus actually are.


We build churches, we donate to charity, we organize together to try and accomplish common goals, we pick sides, we read and study and endlessly rationalize our lives here in the wealthy West or at least, I do these things when really it's quite basic: pick up your cross and follow him. Give all you have to the poor. Love your enemies. See Jesus in the forgotten.

What if Christianity is True? Lessons from Mother Teresa (Part 5/8)

Mark Twain said something like, "It's not the parts of the Bible that I don't understand that scare me, it's the parts that I do! Mother Teresa was a living saint, and her work continues with her Little Sisters all around the world.

Sep 09, Jacqueline rated it liked it. I took a shamefully long time to read this book, but what can I say? I started it shortly before school began, so it got put on the back burner for a while. I enjoyed this book. Formerly a radically anti-Christian academic, Poplin explains how she came to faith and went to Calcutta to serve with Mother Teresa for a period of time.

She comes to the realization that the university setting is her "Calcutta"--her place to serve and make a difference. I was a little disappointed with her final conclusions, though.

I'm deeply curious about how Christian academics view their interaction with the university and how they perceive themselves as living out their faith without openly evangelizing. Poplin's final conclusions weren't very nuanced, though. As a worldview teacher, she explained her realization that she needed to teach Christianity alongside all the other world religions she was teaching rather than omitting it. A good move, but very specific to her situation. I would have been interested to hear how she saw her faith influencing her intellectual work in more subtle ways.

Also, her final appendix included a call to generate internationally connected graduate universities that incorporate multicultural, orthodox believers into their communities rather than being denomination specific. Again, this is a great thought On the whole, though, I'm glad I read the book. I found Mother Teresa's life and ideas about vocation to be deeply compelling, and I'd like to learn more about her. Mar 07, Taija rated it it was ok Shelves: nonfiction. This was the first book from Urbana that I read.

It wasn't quite what I expected, but I am glad I read it. 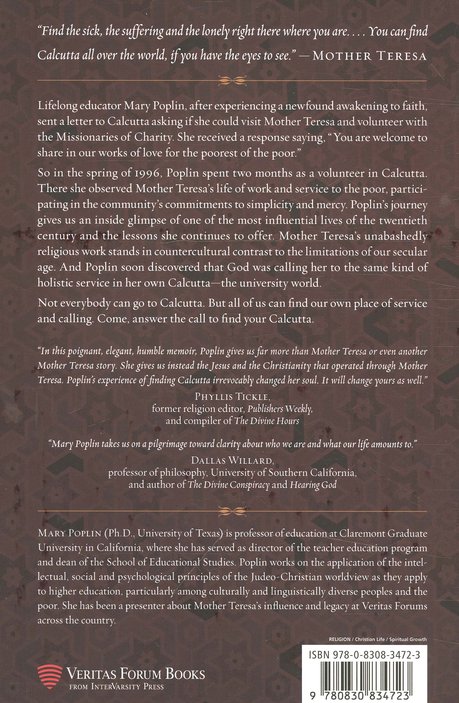 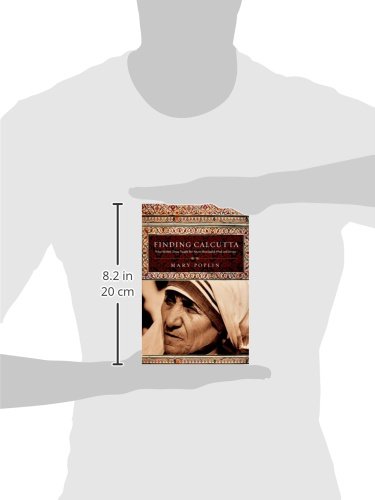 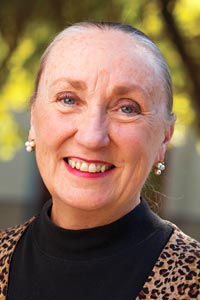 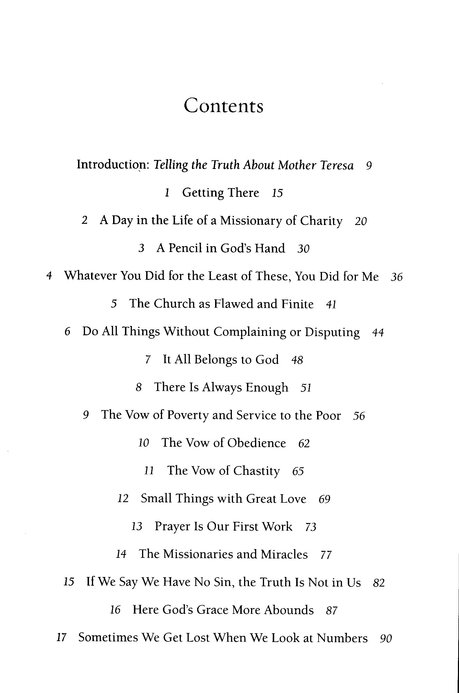 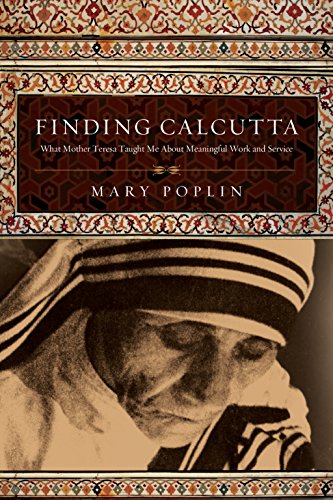